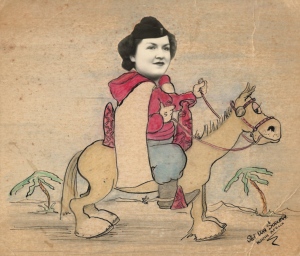 The first known mixed media Don Sudlow art, featuring Frances Rubin (Mann). The unit’s nurses were on friendly terms with local Spahis (North African cavalry serving in the French Army), who often let them go horseback riding with them.
On the back Rubin wrote: “11/11/43
Dear Folks,
Don’t be alarmed. It isn’t all me – I took that picture way back in March & while in the midst of tearing them up Sgt. Sudlow suggested putting in his handiwork. I’ve joined the ‘First Spahis.’
Take good care of it. Some day I’ll have more fun displaying it.” (Courtesy of the Mann Family)